While studying law is usually viewed as a very serious intellectual pursuit that needs a significant amount of dedication and intelligence to complete, it is also a good source of funny stories and puns. Law students may be on their books most of the time, but it doesn’t mean that they don’t know how to have fun.

As it turns out, the long hours of studying they devote on their craft helped them develop a special kind of sarcastic wit. These 21 lawyer jokes that we have compiled for you are not only hilarious, but they are also self-aware, dark, and not to mention cynical. If you love lawyer jokes, you will definitely enjoy reading the jokes we have listed below.

I work in a courthouse, so when I served jury duty, I knew most of the staff. As I sat with other prospective jurors listening to a woman drone on about how long the process was taking, a judge and two lawyers passed by, giving me a big hello. A minute later, a few maintenance workers did the same.

That set off the malcontent: “Just how long have you been serving jury duty?”

A man walks into a bar. He sees a beautiful, well-dressed woman sitting on a bar stool alone. He walks up to her and says, “Hi there, how’s it going tonight?”

She turns to him, looks him straight in the eyes and says, “I’ll screw anybody any time, anywhere, any place, it doesn’t matter to me.”

The guy raises his eyebrows and says, “No kidding? What law firm do you work for?” 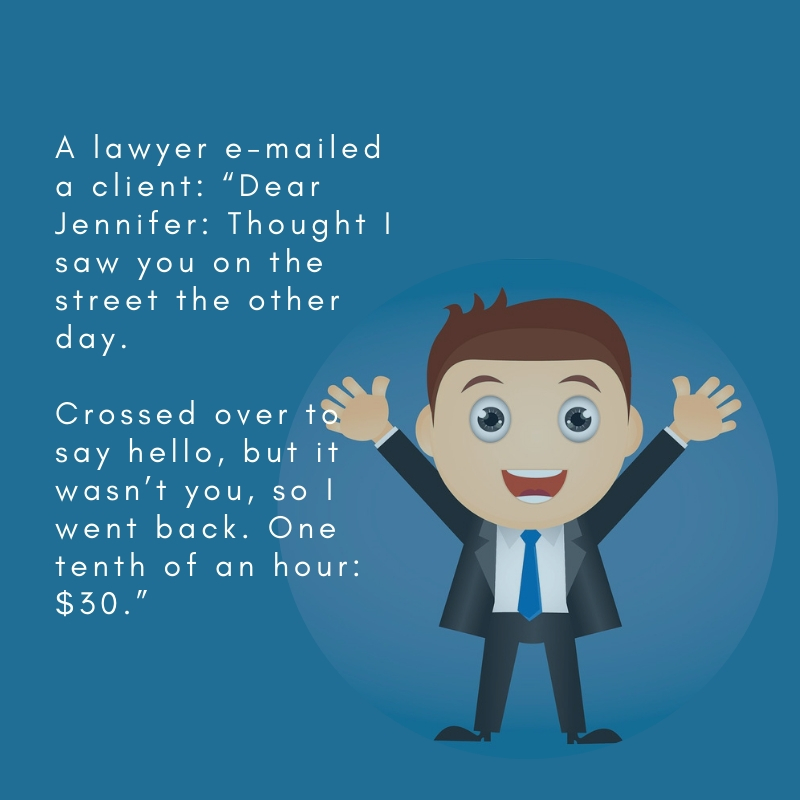 A lawyer e-mailed a client: “Dear Jennifer: Thought I saw you on the street the other day. Crossed over to say hello, but it wasn’t you, so I went back. One tenth of an hour: $30.”

Q: What do you get when you cross a corrupt lawyer with a crooked politician?

A lawyer was filling out a job application when he came to the question, “Have you ever been arrested?” He answered, “No.”

The next question, intended for applicants who had answered, “Yes,” was “Why?” The lawyer answered it, “Never got caught.”

Q: What do you call 500 lawyers at the bottom of the ocean? 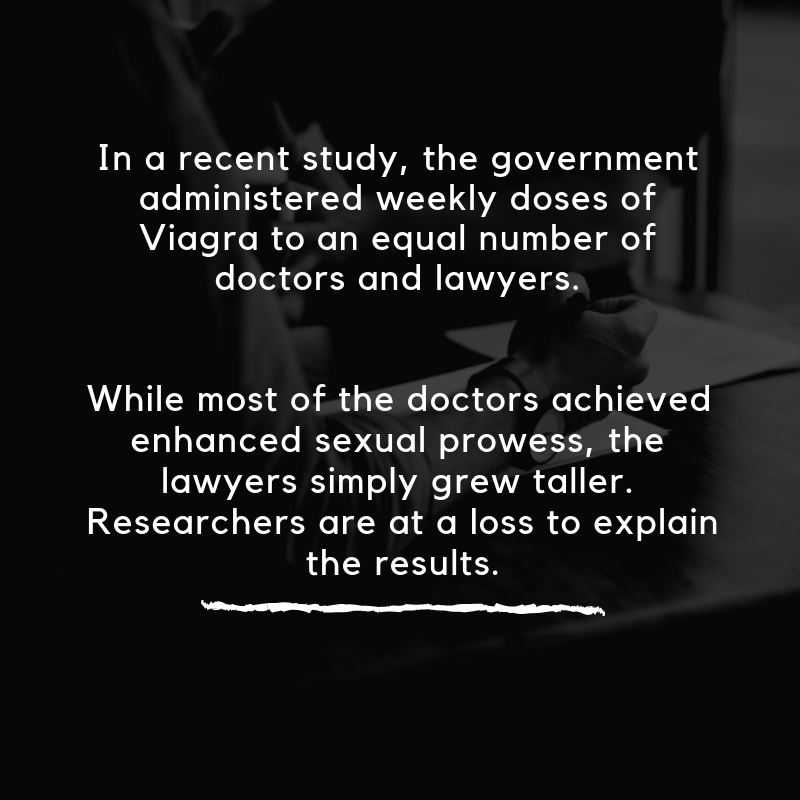 In a recent study, the government administered weekly doses of Viagra to an equal number of doctors and lawyers. While most of the doctors achieved enhanced sexual prowess, the lawyers simply grew taller. Researchers are at a loss to explain the results.

Lawyers occasionally stumble over the truth, but most of them pick themselves up and hurry off as if nothing had happened.

My niece was dragged into court by a neighbor who complained about her barking dogs. At one point, the judge asked the neighbor a question. The neighbor didn’t reply. “Sir, are you going to answer me?”

The neighbor leaped to his feet. “Are you talking to me?” he asked. “Sorry; I can’t hear a darn thing.”

The case was dismissed. 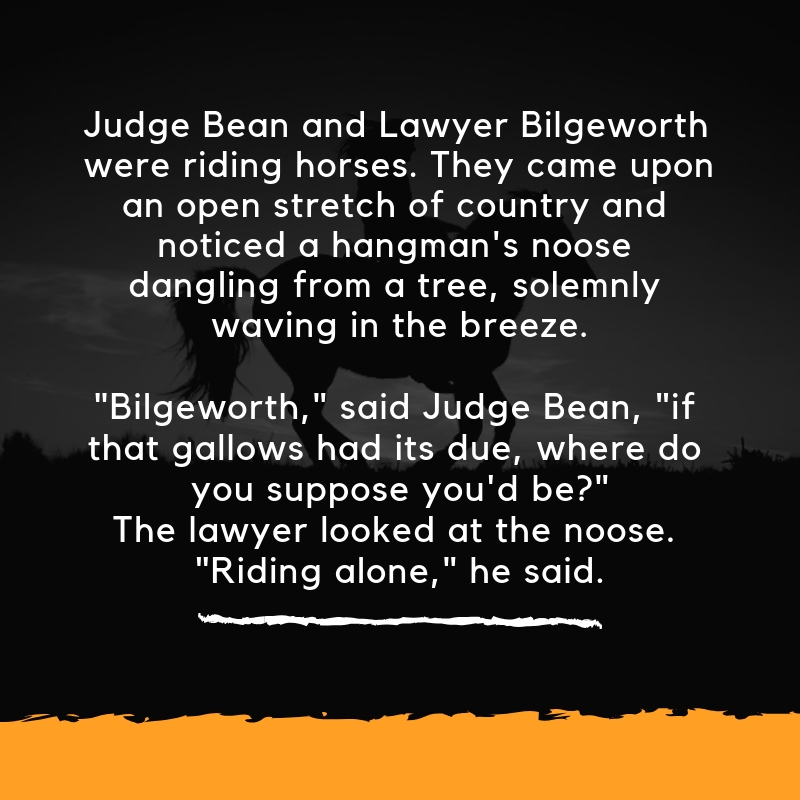 Judge Bean and Lawyer Bilgeworth were riding horses. They came upon an open stretch of country and noticed a hangman’s noose dangling from a tree, solemnly waving in the breeze.

“Bilgeworth,” said Judge Bean, “if that gallows had its due, where do you suppose you’d be?”

The lawyer looked at the noose. “Riding alone,” he said.

Let’s both be naughty this year and save Santa the trip.

The attorney tells the accused, “I have some good news and some bad news.”

“The bad news is, your blood  is all over the crime scene, and the DNA tests prove you did it.”

A lawyer boarded an airplane in New Orleans with a box of frozen crabs and asked a blonde stewardess to take care of them for him.

She took the box and promised to put it in the crew’s refrigerator. He advised her that he was holding her personally responsible for them staying frozen, mentioning in a very haughty manner that he was a lawyer, and proceeded to rant at her about what would happen if she let them thaw out.

Needless to say, she was annoyed by his behavior. Shortly before landing in New York, she used the intercom to announce to the entire cabin, “Would the lawyer who gave me the crabs in New Orleans, please raise your hand.”

Did you hear about the dyslexic Satanist? Apparently, he sold his soul to Santa.

A defendant isn’t happy with  how things are going in court, so he gives the judge a hard time.

Judge: “Where do you work?”

Defendant: “Here and there.”

Judge: “What do you do for  a living?”

Defendant: “This and that.”

Defendant: “Wait; when will I get out?”

Taking his seat in his chambers, the judge faced the opposing lawyers.

The judge reached into his pocket and pulled out a check. He handed it to Leon. “Now then, I’m returning $5,000, and we’re going to decide this case solely on its merits!”

Spotted on a billboard ad for the law office of Larry L. Archie:

“Just because you did it doesn’t mean you’re guilty.”

The District Attorney was approaching the Suwanee River when he noticed a sign, “Caribbean Cruise–$99.00”. He stopped and bought a ticket, whereupon the salesman hit him on the head, wrapped him in a rug and threw him in the river.

The Public Defender noticed the same sign. He too bought a ticket, got hit on the head, wrapped in a rug and tossed in the river.

The Public Defender awoke and called out to the State’s Attorney, “Do they serve drinks on this cruise?”

While serving jury duty, I noticed that the defense attorney seemed a bit nervous. At one  point, he picked up a piece of evidence and asked his client, who was on the witness stand,

“I see an acronym on this receipt. What would CAR stand for?”

The funeral procession included two hearses and a man walking a dog. Several hundred people followed the man. Curious, a pedestrian approached the man. “The first hearse carries my ex-wife’s lawyer,” the man explained. “My dog bit him and he died two days later. The second hearse has a lawyer who opposed me in some business litigation. He met the same fate.”

The pedestrian thought for a moment, then asked, “Could I borrow your dog.?”

“Okay be me, but you’re going to have to wait your turn like these other people.”

A man won an $8,000 settlement from Disneyland after he got stuck on the It’s a Small World ride. He said he’ll use the money to cut out the part of his brain that won’t stop playing “It’s a Small World After All.”

NASA was interviewing professionals to be sent to Mars. Only one could go and couldn’t return to Earth.

The first applicant, an engineer, was asked how much he wanted to be paid for going. “A million dollars,” he answered, “because I want to donate it to M.I.T.”

The next applicant, a doctor, was asked the same question. He asked for $2 million. “I want to give a million to my family,” he explained, “and leave the other million for the advancement of medical research.”

The last applicant was a lawyer. When asked how much money he wanted, he whispered in the interviewer’s ear, “Three million dollars.”

“Why so much more than the others?” asked the interviewer.

Do you like lawyer jokes? Then you would surely love what we have in store for you! We have raised the bar of the limit of comedy and gathered 21 funny jokes, puns, and anecdotes that serves as an evidence that even lawyers like to have fun. Only you can judge whether or not these jokes will tickle your funny bone.