Every golfer needs to have a good laugh every now and then, especially during a very serious game. This sport may seem simple to non-golfers, but the truth is, it is completely the opposite. The game is very hard to master. Over the years, golfers have experienced funny moments on and off the course. These experiences have been translated into the jokes, puns, and anecdotes that are now conveniently written for your pleasure.

If you love golf, you will certainly find these 21 jokes that we have compiled for you absolutely hilarious. We even bet that after reading these jokes, you will share it to your golfer friends and have a few laughs while swinging your golf clubs.

Are you ready to have some fun? Then let’s get to the funny jokes below:

A nun is sitting with her Mother Superior chatting. “I used some horrible language this week and feel absolutely terrible about it,” the nun said.

“When did you use this awful language?” the Mother Superior asks.

Answered the nun: “Well, I was golfing and hit this fabulous drive that looked like it was going to go 280 yards, but it struck a phone line hanging over the fairway and fell straight down to the ground only 100 yards from the tee.”

“Is that when you cursed?”

“No, Mother Superior,” says the nun. “After that, a squirrel ran out of the bushes and grabbed my ball in its mouth and began to run away.”

“Is that when you swore?” asks the Mother Superior.

“Well, no,” says the nun. “As the squirrel was running, an eagle came down out of the sky, grabbed the squirrel in his talons and began to fly away!”

“Is that when you swore?” asks the amazed elder nun.

“Did you swear then?” asked Mother Superior, becoming impatient.

“No, because the ball fell on a big rock, bounced over the sand trap, rolled onto the green, and stopped about six inches from the hole.”

The two nuns were silent for a moment.

Sold by the dozen.

And a week later you have to buy some more. 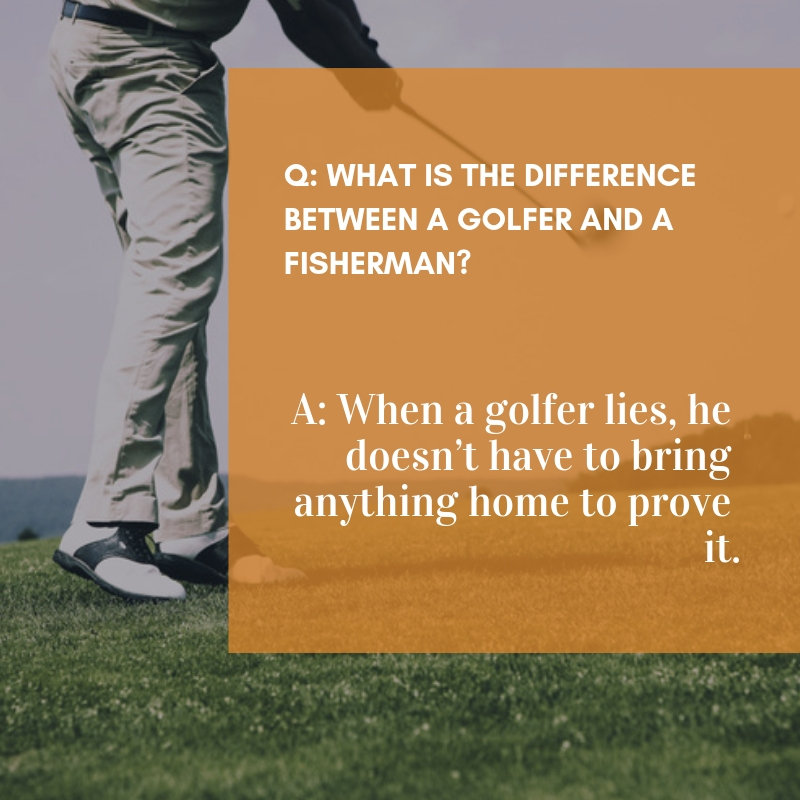 Q: What is the difference between a golfer and a fisherman?

A: When a golfer lies, he doesn’t have to bring anything home to prove it.

Two men ran out to the course for a quick nine after work. They get to the tee and see two ladies playing ahead of them.

One of the men complains that the ladies will slow them down and says he is going to ask if they can play through. He goes halfway to the ladies and turns back.

The other man asked what was wrong. The man said, “I can’t go up there that’s my wife and my mistress.”

So the other man says he will go. He goes halfway and comes back. His partner asked what happened and the man replied, “Small world, huh?”

Two golfers are ready to play on the 11th tee as a funeral cortege passes by. The first player stops, doffs his cap, and bows his head as the cortege passes.

“That was a really nice thing to do,” the second golfer says. “It’s good to see there is still some respect in the world.”

“Well, it’s only right,” the first golfer replies. “I was married to her for 35 years.”

A Baptist pastor decides to play hooky on a Sunday to play golf. He’s playing the best golf of his life when an angel asks God, “Are you going to let this slide? Do something!”

The pastor hits a 425-yard tee shot and the ball goes in the hole for a double eagle. The angel asks, “Why did you reward him?”

A golfer was having a terrible round – 20-over par for the front nine with scores of balls lost in water or rough. When his caddie then coughed as he steadied himself over a 12-inch putt on the 10th, he lost it.

“You’ve got to be the worst caddie in the world!” he yelled.

“I doubt it,” replied the caddie, dead-pan. “That would be too much of a coincidence.”

A U.S. citizen is vacationing on his own in Ireland. He decides to play a round of golf and is paired with three local gents.

He takes a few practice swings, steps up to the first tee, and proceeds to hook the ball out of bounds. He shakes his head, reaches in his pocket, and re-tees another ball. He tells his playing partners that he is taking a Mulligan. He pounds one down the center of the fairway about 280 yards out.

With a big smile, he asks the others “In the U.S., we call that a Mulligan; was wondering what you called it here in Ireland.”

After a moment of silence, one of the locals replies, “Hitting three.”

John Dorsey: A golfer walks off the 18th green, hands his putter to his caddie and says, “Kid, you’ve got to be the worst caddie in the world.”

The caddie replies, “Sir, that would be too much of a coincidence.”

Two Mexican detectives were investigating the murder of Juan Gonzalez.

‘How was he killed?’ asked one detective.

‘With a golf gun,’ the other detective replied.

Guy gets to a long par 3 over water. A voice from above says, “Hit the new Titleist Pro V.”

The guy tees up the Titleist and takes a practice swing.

The voice comes back, “Never mind, hit a range ball.”

A hacker was playing so badly that his caddie was getting increasingly exasperated.

On the 11th, his ball lay about 160 yards from the green and as he eyed up the shot, he asked his caddie, “Do you think I can get there with a 4-iron?”

Bad day at the course,” a guy tells his wife. “Charlie had a heart attack on the third hole.”

“You’re telling me,” the husband replies. “All day long, it was hit the ball, drag Charlie.”

As a couple approaches the altar, the groom tells his wife-to-be, “Honey, I’ve got something to confess: I’m a golf nut, and every chance I get, I’ll be playing golf!”

“Since we’re being honest,” replies the bride, “I have to tell you that I’m a hooker.”

The groom replies, “That’s okay, honey. You just need to learn to keep your head down and your left arm straight.”

Dan and Brandon are playing a spectacular new golf course built on very scenic terrain – cliffsides and gullies and ravines.

They reach the 6th hole, where Dan slices a ball into a thickly wooded, deep ravine. But Dan is determined not to take a penalty stroke, so he grabs his 8-iron and starts descending into the ravine in search of his ball.

The brush is terribly thick and tearing at Dan’s clothes. The sunlight is dimmed by all the overhanging branches and vines. But Dan keeps searching, and finally spots something shiny down below.

As he nears the object, he realizes it’s not a ball, but a golf club. Dan takes a closer look only to discover that it is an 8-iron – and it’s in the hands of a human skeleton laying near an old golf ball!

Dan yells out for his partner. “Hey Brandon, get over here, I got trouble down here!”

Brandon hurries over to the edge of the ravine and yells down, “What’s the matter Dan?”

Q: Why do golfers always carry a spare pair of trousers with them?

A: In case they get a hole in one

Bud the golfer sets off on a round-the-world trip in his new boat, but he winds up veering off course and gets lost. He drifts onto a deserted island, where he is stranded, all alone.

Months go by and there’s no sign of rescue, and not even a soccer ball to keep him company. Then one day Bud sees a beautiful mermaid coming out of the surf, heading straight toward him.

The mermaid stops two feet in front of Bud and asks him in sexy voice, “Would you like a drink?”

Bud doesn’t have to think about his answer. “You bet!” he nearly shouts.

The mermaid opens the vest she’s wearing, reaches in and pulls out an ice-cold beer.

Then she asks, “Would you like a cigar?” And Bud quickly answers, “You bet!

The mermaid opens her vest even more and pulls out a Tatuaje Cigar, which Bud lights up immediately with the lighter the mermaid also gives him.

The mermaid bats her eyes, opens her vest even more, and coos to Bud, “And would you like to play around?”

Golfer to caddie: “Why do you keep looking at your watch? I find it very distracting.”

Bob was a religious golfer. Every Sunday morning, he headed to the golf course. It didn’t matter what the weather was like. It could be raining and cold, but Bob didn’t care. It was off to the course. Every single Sunday morning for years.

But one Sunday, Bob finally met his match with the weather. He got up early and drove out to the course, hoping the weather would improve by the time he hit the first tee. But once at the course, he knew he was beat. It was just a few degrees above freezing, and the rain was coming down steady and icy cold.

For the first time in years, Bob headed back home on a Sunday morning.

His wife was still in bed when he got there, so he took off his clothes, snuggled up to his wife’s backside and said “Terrible weather out there.”

“Yeah,” his wife replied, “and can you believe my idiot husband went golfing?”

A guy on vacation finishes his round, goes into the clubhouse. The head pro says, “Did you have a good time out there?”

The man replied “Fabulous, thank you.”

“You’re welcome,” said the pro. “How did you find the greens?”

Said the man: “Easy. I just walked to the end of the fairways and there they were!”

A wife and her husband are sitting around one evening, just talking, when the wife suddenly asks, “If I died, would you re-marry?”

“I would,” the husband answered.

“You would?” the wife asked, a bit surprised. “Would you let her come into my house?”

“Would she be cooking in my kitchen?”

“Would she be soaking in my bathtub?”

“Would she be putting her clothes in my closet?”

Growing more exasperated, the wife continued asking: “Would she be driving my car?”

“Would she be sleeping in my bed?”

“Would she be using my golf clubs?”

One day the man and his wife were on the first tee of their local course. He was on the white tee and she was waiting in front of him by the ladies tee.

He teed off and caught the ball perfectly; unfortunately it hit his wife smack in the back of the head killing her instantly.

She fell face down on the tee, didn’t know what hit her.

They had an inquest on the wife’s death, the coroner said it was clear how she died, she was killed by a golf ball, and that there was a perfect imprint of a golf ball on the back of her head.

The husband said, “Yes, that was my ball.”

The coroner then went on to say that he was a bit concerned to find a ball inserted up the woman’s backside, and could the husband throw some light on this?

The husband said, “Oh that must have been my provisional. I wondered where it went.”

Do you love playing golf? Then you will find our collection of golf jokes delightful! Today, you can have a few giggles with your golf buddies that will surely crack you up all day long.